The poor east west transport links in the Cambridge – Milton Keynes – Oxford corridor will be addressed, not just by East West Rail but also by construction of an Expressway road between Oxford and Cambridge. While the railway will restore existing lines between Oxford, Milton Keynes and Bedford in contrast the route for an expressway linking Oxford to the M1 is not yet defined and likely to be very controversial. Details are unclear but this Highways England report from December 2017 suggests this road will  be coming rather soon and could be driven in a direction close to Bicester. Yet, unlike East West Rail where a third round of public consultation is happening now, there has been precious little public involvement so far.

What is an Expressway?

In many ways an Expressway is like a motorway. It is a high quality, high speed road, generally dual carriageway and grade separated (no roundabouts or right turns) and is designed to be as safe as a motorway. But it is also not a motorway – maybe because the traffic demand is deemed not enough to justify construction of a motorway. For example, it may have steeper gradients and no hard shoulder. Examples include the A14 between the M1 and Felixstowe; A34 between the M3 and M40; and the A42 between the M42 and M1. These Expressways are part of the strategic road network managed by Highways England.

But a new type of ‘smart’ expressway between Cambridge and Oxford will feel more like a motorway. Signage will be on a blue background and there are some ‘Smart’ motorway features. These include emergency refuge areas and a variable speed limit but the road would lack a hard shoulder. The road would probably have a designation in the form Axx(M), not least because there is not an obvious 2-digit A road number to use or re-use. 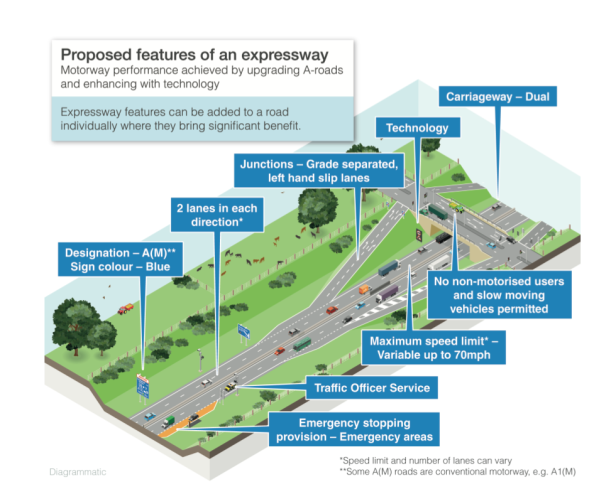 Notably ‘Smart’ motorways introduced elsewhere have been as a cheaper alternative to widening of some of the more congested sections of road. These make use of the hard shoulder as an extra running lane. But government is planning these congestion-busting features from Day 1. They surely know this Expressway is going to generate lots of traffic, but without the extra benefits a hard shoulder provides.

The NIC report Partnering for Prosperity published in November 2017 makes interesting reading, particularly pages 34-36. It talks about designing transport to unlock major housing growth. Key opportunities for growth in the next 30 years, could include:

The Expressway is not really about linking Oxford to Cambridge; it is more about large scale house building and the expansion of Milton Keynes. So why not just build a motorway in the first place?

Unlike the Central Section of East West Rail from Bedford to Cambridge, the route of the future Expressway between Cambridge, St Neots, Bedford and the M1 is fairly obvious. Heading west from Cambridge to St Neots the A428 (former A45) is already dual carriageway as far as the A1198 at Caxton Gibbet.

Then it is a single carriageway as far as the A1 at St Neots and where you then head south on that road to the notorious ‘Black Cat’ roundabout. Here the A421 joins the A1 on the level. The biggest job in this section will be construction of the grade separated dual carriageway and linking it to the A1 and A421, probably south of St Neots at a new junction.

To the west, the A421 is a grade separated dual carriageway by-passing Bedford to the south and joining with the M1 at Junction 13 east of Milton Keynes.

Junction 13, although much improved, still looks like only half the job has been done. Continuing west the A421 is still just a single carriageway. It passes through Milton Keynes as the H8 Standing Way which also doubles as a local grid road with many at-grade roundabouts. Although the planners left space for dualling, a new southern bypass of Milton Keynes leading from M1 junction 13 without having to reconstruct the many roundabouts looks to be in order. But it is how the Expressway might reach Oxford that will be a concern to many.

Broadly speaking there appear to be three options. One option would see the A421 improved beyond Milton Keynes via Buckingham and Finmere to where it would follow the A4421 towards Bicester.  It would pass Bicester somewhere to the south and link with the A41 and the M40 at Junction 9. From there the route is along the A34 to Oxford and beyond. Anyone that knows that section of the M40 and A34 will know that the last thing you would want to do is funnel even more through traffic through J9 and down the A34 through Botley towards Abingdon and Didcot.

A second option would broadly follow the route of East West Rail between Milton Keynes via Winslow and Bicester rather than the A421 / A4421. Again it would pass close to the south of Bicester from where there are different options; either via the A34 or a more southerly routing to the south and east of Oxford.

A third yet more southerly option would be south of the East West railway, with a routing broadly via the A418 closer to Leighton Buzzard, Aylesbury, Haddenham and Thame. Then it follows the A329 across the M40 and eventually west to the A34, probably somewhere between Abingdon and Didcot. If you have ever had to drive from Didcot or Wallingford to Aylesbury you will know that the roads are not good and could do with improvement!

When will it happen?

The Government will ‘accelerate’ work on the ‘missing link’ elements of the expressway between Cambridge – Milton Keynes. Construction could begin in the next road period on the section to Oxford (works on site by 2025) with an aim to open the route to traffic by 2030. The road is thought to cost in the region of £3.5bn. England’s Economic Heartland (a voluntary partnership of councils and local enterprise partnerships, in the key growth corridor from Oxfordshire through Milton Keynes and across to Cambridgeshire) will be commissioned to analyse how communities not on the route of the ‘missing link’ will be able to benefit.