From time to time I am required to get from A to B by public transport when working delivering and collecting cars as, more often than not, the collection location is not in the same place as the delivery. Sometimes I can get a lift between jobs but at other times I have to walk or use trains and buses as only in exceptional circumstances does my employer authorise a taxi. It does mean often there is a fair amount of waiting around though I don’t particularly mind this. As long as my employer accepts that it may take longer on public transport, picks up the tab for expenses, and is still willing to pay me for my time it is not an issue.

I also don’t mind walking –  provided it’s not too far (30-40 minutes is no problem) it is often quicker than waiting for public transport. I have nothing against buses as such but among my gripes about using buses was not knowing where they go or where to get off, particularly in an unfamiliar location.

I do prefer to use trains or the tube when in London. Trains are so much more predictable being confined to set tracks. And if you know where to look, you can see the whereabouts of your train in real-time. Plus trains don’t get stuck in traffic jams! Over longer distances, train wins hands down.

It is still a bugbear actually knowing if or when a bus will actually turn up. It may be a cliche but I’ve been caught out many times without a bus only for 3 to turn up in quick succession. In general live bus information is still not very good compared to trains or planes. It makes waiting for buses a bit hit and miss still, particularly if its raining and there is nowhere to wait in comfort. And I have learned to beware of infrequent buses particularly outside urban areas. I once missed a bus in Weymouth and had to wait 3 hours for the next one to Bridport. Fortunately it was sunny, my customer didn’t mind the delay and I was by the sea.

Another gripe of mine is that you generally need separate tickets for each bus.  By train it one through ticket will get you from A to B even if it involves using different trains, although it has to be said finding the cheapest ticket on the railway can be a minefield in itself. Importantly, that railway ticket is a guarantee of being able to get from A to B.

I prefer to use trains where available but sometimes it is not an option particularly when buses can go places the train cannot. Overall I would say that, with the advent of new technologies, my reasons not to use buses have diminished. Even Google Maps goes beyond what a SatNav will do; providing options for our hypothetical journey from A to B not just by car, but also by public transport or on foot for example. Its not perfect, but considering it is provided at no cost, there can be few complaints.

One autumn day in late October I found myself needing to get across Buckinghamshire from Chalfont St Peter to Bourne End. There was no obvious route by train but Google did come up with a journey involving 3 buses. The first leg to Beaconsfield was by Carousel buses but there was only 1 bus every 2 hours. The weather was showery so I decided to walk along the bus route towards Seer Green just in case. 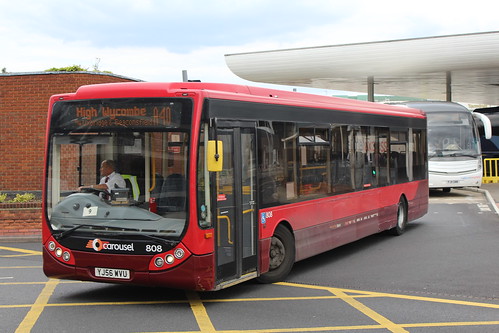 I caught the bus on time to Beaconsfield whereupon my next bus to High Wycombe (also Carousel) was delayed. As my bus to Bourne End was hourly I was concerned I would miss my connection if I continued as planned. I kept looking at Google maps for an alternative and was pleasantly surprised when it came up with an option to get off short at Loudwater and cross the road to catch the No 37 Arriva bus towards Maidenhead.

The ordinary-looking bus stop in Loudwater was surprisingly high-tech. No bus shelter but there was a Kindle-like real-time display that did refresh every minute. Impressively when it said the bus was due it actually turned up a mere 20 seconds later!

When I arrived at Bourne End it was only a short walk to the customer.  My heart sank when I found out there was no vehicle to collect and I’d need to make my own way back to base.

Back by Bus or by Train?

The quickest way back turned out to be by train and although I’d had a good journey by bus I felt sure I would not be so lucky with buses on the return. The hourly bus back to High Wycombe had just disappeared into the distance.

By now the sun was shining. A walk across the Thames took me to Cookham and its station. From there I had to catch a Class 165 Turbo unit and change at Maidenhead for one of the new Class 387 Electrostars to Reading. Then it was a quick dash across to Platform 9 for a Worcester-bound HST as far as Oxford.

Up until January 2018 you’d have been able to catch a direct train from Maidenhead to Oxford but for now the wires stop at Didcot. A change is now required there or at Reading. The HSTs will soon be retired from GWR services out of Paddington in favour of Class 80x bi-mode Intercity Express Trains. I was pleased to have caught one to Oxford for what could turn out to be the last time.

These new Hitachi-built IET trains have diesel engines as well as being able to run from 25kV AC overhead electric and already run most of the services to Worcester and Hereford. If you believe the DfT logic then we are seeing the benefits of electrification quicker, but without the need (and cost) of wiring!

Local rail users between Oxford and Reading in particular might disagree. The 387s now run the local services from Paddington which once ran through to Oxford. Mostly 8-car trains represent a big improvement in capacity but they can’t go beyond Didcot and can’t access the sidings at Oxford that were built for them! Common sense will see the wires extended to Oxford, but as yet there has been no announcement from DfT.

Whichever way I had chosen to travel back, the last leg of my journey to Upper Heyford inevitably required another bus journey on Thames Travel’s 250 service. I knew I’d have a little wait in Oxford so I didn’t hurry myself.

Sure enough my luck with buses was not going to hold. The 250 bus was missing from the realtime display at the stop.  Shortly after the due time it showed up as “DUE” before disappearing again from the display. Sadly the latter hit and miss nature of buses is all too familiar. 10 minutes later the bus did show up and I was able to get back to base, albeit delayed. But if I had been stuck at the roadside in the pouring rain with no information and no shelter I would not have been so forgiving. It is easy to see why most people choose to drive.

All in all my not particularly productive day out involved 3 trains and 4 buses from 3 bus companies. An interesting day which showed what might be possible with buses, but still needs big improvements in reliability if people are to be tempted from their cars.